What does Trans Day of Remembrance mean to you?

I think primarily Trans Day of Remembrance means care for myself, and care for my community. We remember those we have lost and we meditate on how we can remain here without them. It means coming together to share and to grieve, to love and to forbear. I personally feel the dichotomy of being excited to share a space with other Trans people and devastated for all the losses our community has received.

We lose so many Trans people in myriad different ways. The murders are horrific, but actually so are the suicides, and so are the undetected losses due to failures of care within a wider system of oppression. For me, Trans Day of Remembrance is about acknowledging the lives of the people we knew, and the ones we didn’t. It’s remembering those still standing around us, and remembering ourselves too. We need to care for our community, so that Trans people are safe and supported and able to commemorate those we have lost.

Who are some trans or gender non-conforming people (past or present) who you look up to?

Literally all Trans femmes. As a Non-Binary Trans masculine person, I am forever in awe of Trans women, they start all the movements, and we as a community owe them so much!

I think Tourmaline is fantastic, she is so bright and so driven she is making some much needed work. Lucy Hicks Anderson (who is a historic Trans person) was amazing, because she just did what she wanted and was kind of an original f**k the police icon, she married two men and openly lived as a woman and an army wife, which is mad when you think she was born in the 1880s. Danielle Braithwaite Shirley makes the most fantastic art. I want to live in her pieces all the time. Everyone should go check out Black Trans Archive.

Lastly, my Trans friends are the people I look up to the most. They teach me how to get through the everyday as a Black Trans and Non-Binary person and they somehow always have my back before I even know that I need them to.

What do you see as some of the main issues facing transgender and gender non-conforming people today?

That’s a massive question! I think that the issues faced systemically for trans people are some of the most threatening and the most violent. Naomi Hersi’s death last year was horrific, but the fact that it went almost unnoticed by the press at the time is terrifying. It’s like Trans people don’t exist until a cis person speaks negatively about us. Why is there such a thing as “the trans debate” when cisgender people’s existence is not a debate?

If someone is visibly Trans (which is not a requirement for anyone in our community) then there’s a very real threat of violence. If a person is “out” as Trans to their peers, they will almost definitely be asked to justify themselves and their gender. People feel entitled to ask about our bodies, have we had surgery? Which surgery? What about hormones? Are we trans if we don’t have these things? (YES OF COURSE WE ARE!) This can be particularly difficult to explain for the Non-Binary and Gender Non-Conforming people (like me) as we do not neatly align with male or female genders.

This constant questioning of Trans identities implies that we are somehow less worthy: less worthy of respect, less worthy of love. That’s why so many of us get killed, because Trans people genuinely are seen as not being important outside of objectification. This dehumanising treatment resonates with me especially, as Black people also have a history of being objectified.

Tell me a bit about What Can We Do, how it started, and how it addresses these issues…

What Can We Do is a grassroots collective (a community group who want action) working to support Black and Brown Trans and Non-Binary people in the UK. I founded it! We help fund healthcare, mental health, and housing for the people we support.

The project started with me seeing a local fundraiser and emailing everyone and anyone I could think of saying “Why the heck are you not supporting this person?” Then there were more and more fundraisers. I noticed I’d be talking to a Brown or Black person about this and thinking “they’ve got similar problems to me,” then realising that we don’t have many solutions at the moment. Trans people experience transphobia, but when it is intersecting with racism, it can make what few options we have available to us for healthcare, mental health and housing completely inaccessible.

Crowdfunding for Black and Brown Trans people shouldn’t have to happen, but I know first-hand that this project is needed because our community’s basic survival needs are not being met.

In the collective, we have 25 volunteers and myself who come together monthly to reach out to companies and ask them to redistribute their wealth. We are asking the people with the resources to help to create this change. We are also working within the communities where we live (mostly in Leeds) to help create support systems there. We have a fund where individuals can pay us directly, and we are trying to grow and outreach as much as possible so that we are really able to make a difference.

Why do you feel it is important to focus specifically on Black and Brown people within the Trans and Non-Binary community?

There are many disadvantages which Black and Brown people face that mean they are less financially capable (they have less money). Systemic racism affects Black and Brown people’s likelihood of getting a well-paying job, a degree, a mortgage, a nice flat to rent that’s near their workplace, and many other factors which determine a person’s financial standing in life.

When a person is trying to afford gender affirming treatments on top of living at a financial disadvantage, it is made much more difficult. The Gender Identity Clinic offers some gender affirming treatments with a 3 year waiting time for an initial appointment. But Covid has seen Gender Identity Clinics closing across the UK, with the Leeds GIC cancelling all appointments and redeploying staff elsewhere. Even if Gender Identity Clinics were to open tomorrow, Black and Brown people are still regularly denied treatment because of BMI calculations in relation to body shape, which do not take into account the differences in muscle distribution or socio-economic factors affecting Black and Brown people’s weight.

How can people support the organisation and its vision?

You can donate to us (here and here)! All the money donated through mutual aid goes directly towards the cause (bar a small % charge to our page which we are trying to further reduce.)

Honestly, it’s pretty crucial that people don’t think that donating is someone else’s responsibility. If you are not a Black or Brown Trans person, then you need to be paying up. Think of it like reparations, if you’re white, you are spiritually and emotionally cleansing yourself of your ancestors’ racist actions and the damage which you otherwise continue to inflict by not donating to and supporting us. Cis white people have double the obligation to support, as they also need to work to make Trans people safe in their community.

We’re also open to new ideas, we love people putting up our posters and our leaflets, or having donation buckets for us out around shops! So if people have an amazing idea for supporting us, we wanna hear about it!

We have social media too, it’s pretty rad and useful to stay up to date with what we are doing. 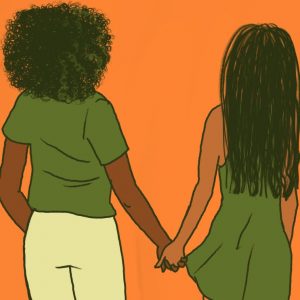 All artwork created by Malaika and Newt